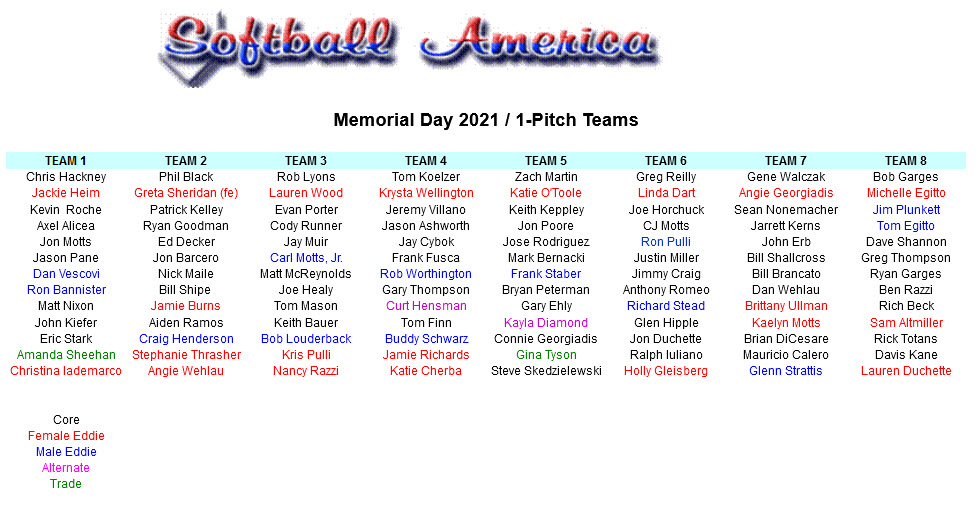 Anthony Romeo has challenged 1-pitch contestants to hit his Synertree Banner in center field with an over the fence HR using a wood bat. Should you hit the banner in accordance with HR banner rules, Anthony will reward you with $100.00 cash green money. Piece of cake!
Top

Gregory Thompson can no longer attend the 1-pitch tournament. I am in the process of finding Greg's replacement via an alternate lottery draft.
Top

Phil Black is no longer willing to participate in the 1-pitch tournament. My guess is more will follow as a result of the Greg Thompson ban. If things get out of hand, the Memorial Day tournament may have to be canceled altogether.
Top

Hopefully those involved can have a real discussion to resolve this so that we can salvage both the 1 pitch tournament, and the Thursday mens A league that's already struggling to bring in competitive teams.
Top

Hopefully everything can get worked out, or else everyone has to hear about me being REIGNING WOOD BAT MVP for longer.
Top

The tourney will get played one way or the other. If we have to replace the missing pieces or redraft, the games will go on.
Top

Curt Hensman will take Gregory Thompson's place on Team 8. Curt was in the original body of the draft, but was forced out due to an umpire shortage. Umpires have now stepped up and are willing to take Curt's place. No disrespect to the current alternates, but under the circumstances I felt it was only fair to reinstate Curt as a draft candidate/player. As a result of the fallout from the Gregory Thompson debacle, my guess is there will be ample opportunity to enter the tourney moving forward.
Top

Greg Thompson has been reinstated as a league member in good standing and will return to Team 8 for the Memorial Day tourney. Phil Black will return to his managerial duties on Team 2.
Top

A trade has been proposed between Team 1 and Team 5. Gina Tyson to play for Team 5. Mandi Sheehan to play for Team 1. All that is needed is confirmation from Team 5 to consummate the deal. Trade now official.
Top

All that's left to do is hope for good weather.
Top

There seems to be a little confusion on the newly implemented tournament walk rule. If a core player is walked with a female eddie behind him, the core player will be placed on 2B and the female eddie will bat. This rule is in effect through the entire game, unlike our league rule which needs 2 outs in the 5th, 6th, or 7th inning for the rule to kick in.

The majority of managers like the rule. Some league members are skeptical. I feel it's worth a try. After all, if nobody ever wondered what that oval white thing that comes out of a chicken's butt was, we would never be able to enjoy an omelet. If this rule doesn't work, we tweak it for the next tourney. If the tweak doesn't work, we scrap it. It's not like it gives one team an advantage over another.

The hope is it deters pitchers from intentionally walking a core player to get to a female, either to give their team a better chance at ending the inning or to set up a double play on the female batter. The other hope is it takes a little of the fear and shame away from being set up and grounding into a double play. Consider this a work in progress. Nobody knows exactly how it will turn out until we put it to the test.
Top

Interesting rule. Noted that this only applies to walking a core player in front of a FEMALE eddie and not a MALE eddie. Also, walking a MALE eddie to get to a female eddie would not trigger this rule. Am I correct?
Top

That is a good question- one we will have to answer before the tourney. My gut tells me that is correct, but I'd like to hear from tourney managers.
Top

The idea is to give the girls a leg up, so to speak. So if managers agree, the rule would read...  If a male batter is walked with a female eddie behind him, the male batter will be placed on 2B and the female eddie will bat.
Top

I like that. Looking at the male eddie list, most of those guys are studs anyway (present company excluded, LOL).
Top

In a situation where there is a runner on 2B and nobody else on base and a male is walked as described in the rule, would the runner on 2B advance to 3B or score?


The runner on 2B would advance to 3B on the force at 2B.
Top

Mike Marnoch can no longer attend the 1-pitch tournament. After giving this situation more thought, I have decided to place Curt Hensman as Mike's replacement on Team 4. Curt was in the body of the draft, but pulled out due to a lack of tournament umpires. The umpire shortage was resolved, giving Curt the opportunity to re-enter the tournament. After all, Curt pulled out so the tournament could get played. I think that's only fair. Curt is a comparable replacement to Mike.

I am fully aware this move goes against 1-pitch alternate protocol, but this is what I would consider an extenuating circumstance. It's tough to play the game without an umpire. Curt sacrificed himself so the tourney could go on. The very least the league can do is have a little compassion and understanding. Again, extenuating circumstances.
Top
Post Reply
35 posts