Tournament statistics have been formulated and are now posted online. Tournament MVP (Most Valuable Player) is named from the winning team. MVP’s (Most Valuable Producers) are players with the most production relative to the categories listed below.

A fair and balanced statistical formula is used to produce MVP winners. It does not favor the power hitter, nor does it favor the player that hits for average. The formula takes into account at-bats (9 plate appearances required for consideration) H (hits), (R) runs, (RBI) runs batted in, OBP (on-base percent) and (BB) walks.

Congratulations to the following MVPs (Most Valuable Producers):

Each of the aforementioned will receive an MVP plaque. The winning managers, Zach Martin and Katie O'Toole, will each receive championship plaques. Each member of the team will receive custom 1-pitch tournament championship jackets or sweatshirts.

I've often mentioned to people I do these tournaments to give back to league members. Some can understand that statement, most cannot. All people seem to see is the money coming in and never bother to give the money going out a second thought. I've ignored the money comments for a long time, but I just can't ignore them any longer. It's just painful to hear. No good deed goes unpunished. That is true in this case.

Below are the proceeds and expenses of running a 1-pitch tournament. 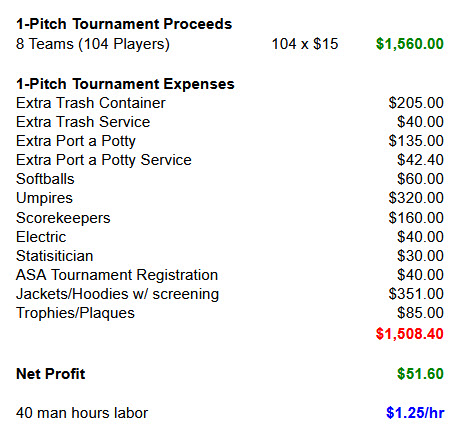 Listen, I don't want or need a pat on the back. I don't want or need accolades of any kind. After all is said and done, I'm working to bring the tournament to fruition for a buck and a quarter an hour. All I ask is that league members accept what I'm doing for what it is (give back) and not turn it into something negative or cynical.
Top

1. Les, it's nobodies business how much money you're making on the league, on a tournament etc... you're not extorting money or forcing people to play Softball. You're also not the only act in town.

2. If someone can not understand the expenses of things that go into making a Tournament work etc then do you think they will read the above statement and believe what you posted?

3. When you say no good deed goes unpunished I want you to think about something for a moment.

A. How many players played in the One Pitch?
B. How many teams are in the league that faithfully pay the league fee even though it's more expensive then other leagues?

You have to understand that in any product or service rendered you are going to hear complaints. The compliment is the referral. The numerous new members every year that are recruited by your current league members.

Personally I think the give and take is pretty fair. I pay for an organized product in which I am fairly certain an umpire and scorekeeper will be at every field, a fight won't break out and teams won't be able to stack and cheat come playoffs due to an organized website.

I don't need to tell you that you are doing a good job! I do that every session by purchasing 3 to 4 more league fees.

A wise man once said.. "If you don't have haters, you're doing something wrong"
Top

I guess the skin gets thinner as we age, not to mention sag and wrinkle.

Yep, people will believe what they want to believe regardless of the facts. Thanks for the pep talk, Geno. It can really beat ya down after a while. I'm sure you know all too well. All good.
Top
Post Reply
4 posts • Page 1 of 1