Has the shutting down of Montgomery County affected any use of fields such as Lukens, Hatfield, Stover, and Cedar Hill?
Top

At this point, Central Bucks School District and Hatfield facilities are off limits- CBSD until the 14th of April, Hatfield until further notice. I am playing this situation on a day to day basis. There is a possibility we will delay Opening Day by a week or 2, or at least until we can get toilet tissue for the port-a-pots (just kidding). In all seriousness, the Quarry ball field is now controlled by yours truly so unless Bucks County mandates a closing of all public sporting facilities, we have the choice to play or not to play. I will be reaching out to managers to get their feelings on the matter. If you as a player feel strongly one way or the other, please contact your team manager.
Top

I will be reaching out to league managers, umpires, and scorekeepers in the not-too-distant future asking what their thoughts are on starting the softball season on time considering the Coronavirus situation. I will not force anyone to play/work under these circumstances if it their choice not to. Aside from any government mandate, the choice to start the season on time will be up to the teams in each league, along with the umpires and scorekeepers of each league.
Top

CB School District, Hatfield Township, Telford Borough, and Horsham Township have all closed their facilities for at least 2 weeks. These closures include the ball fields we play on. While the Quarry ball field has not been mandated closed by any state or local authority, quite a few of the managers I spoke with would prefer to exercise caution and not start on 3/31. I agree. Opening Day has been postponed. A tentatively start date has been set for Monday Coed, April 6th, but this date is NOT etched in stone. We will re-evaluate on a weekly basis.
Top

At this point, Opening Day has been tentatively set for April 13th (Monday Coed). God willing, local, state and federal government guidelines will have eased up a bit by then.

League member safety has always been and will remain at the forefront. Social distancing shouldn't be a problem playing softball. Players can use their own bats, not touch their face and disinfect their hands frequently to remain safe. In spite of all this, if league members remain leery about starting the season on the 13th, the league will re-evaluate. League members concerned about using cash can always remit their league fee online.

Old Man Winter is in the rear view mirror. The sun is setting later in the day, the weather is moderating, and people are chomping (champing) at the bit to get out and play some softball. I get all that, but we must remain vigilant. COVID-19 is not something we should take lightly. We've all made great sacrifices. Let's not throw it all away. We will take a 'wait and see' approach and hope for good news in the days ahead.
Top

I have to admit I wasn't expecting this virus to take off the way it has. Being an eternal optimist, I really thought things would be getting back to normal by now. So not the case. If anything, it seems to be getting worse by the day. It's like a bad dream that you can't wake up from.

Being so close to the Northeast epicenter, you guys have my deepest sympathies and prayers. I'm holed up on the West Coast of Florida waiting for things to ease up. I can think of worse places to be as there are 50 COVID-19 cases in all of Sarasota County and only 9 in Port Charlotte County.

With the President placing things on hold until the end of April, the hope is we can open the season on Friday, May 1st with coed games at the Quarry and men's games at Stover. That is if Telford Borough opens the Stover ball field. We will then move to Sunday games if and only if Hatfield and Horsham Townships open their ball fields. School district ball fields are likely to be the last to open if they do at all. Running the Sunday leagues would not be a problem if we only had the 3 Horsham fields, the Hatfield ball field and the Quarry. If we had only the Quarry, the A division will be allowed to start.

Starting the spring season on May 1st will push our softball year back a solid 4 weeks. Getting the spring and summer leagues in shouldn't be a problem. Getting the fall league in will be a definite challenge. Depending upon the number of rainouts in each league, we could run an abbreviated fall season or, if teams are willing, run a full fall season using all of November and part of December. Sort of like a fall/winter league. Being we now control the Quarry ball field, playing at the Quarry into December is an option if the masses are willing. We couldn't fit all the teams into this conceptual fall/winter league as there would be no Hatfield or Stover fields and 10:15 games would not be scheduled, but we could accommodate a number of teams.

Winter ball can be fun as long as we have similar weather to the winter we just had. I ran a snowball game back in the early 2000s and we had a blast. It had snowed about 6" and within 2 days of the snowfall we had about 20 ball players show up and play. Below are a few pictures from that day.

The bottom line is we have options. If the league is ready, willing and able, I am as well. 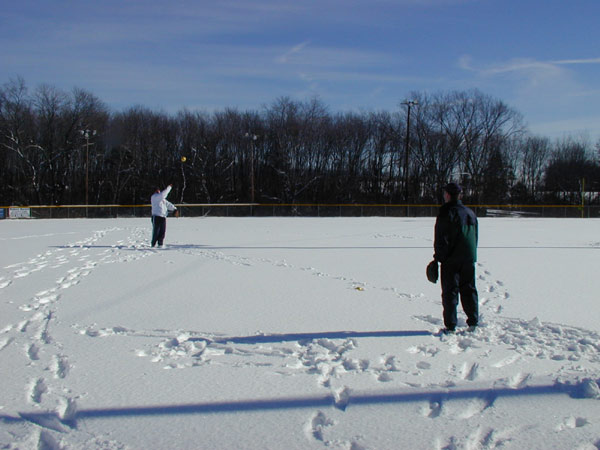 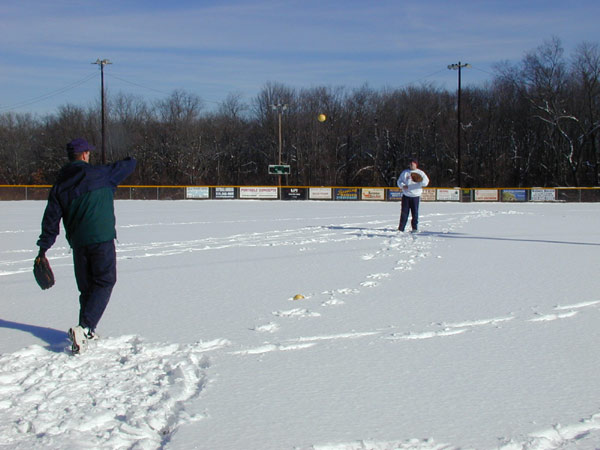 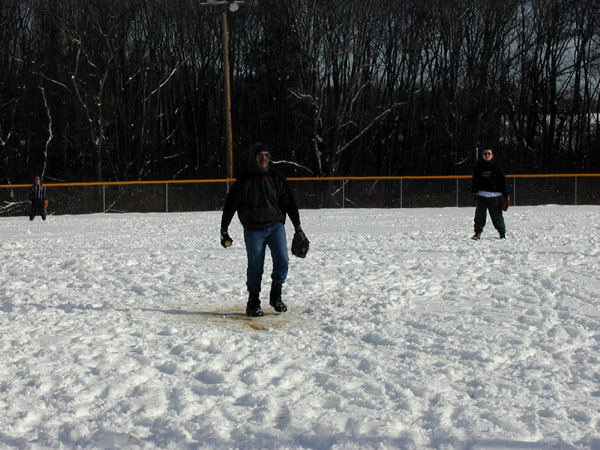 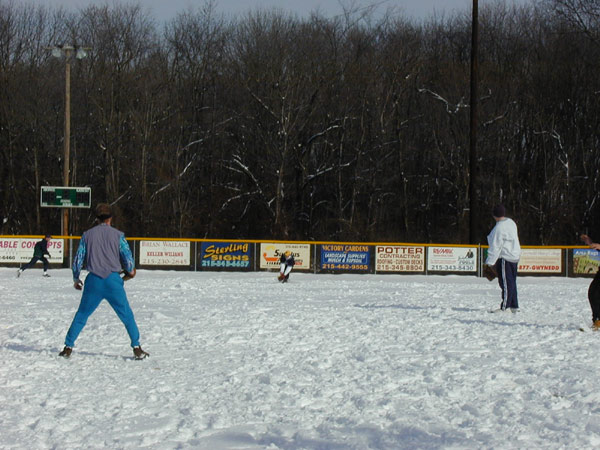 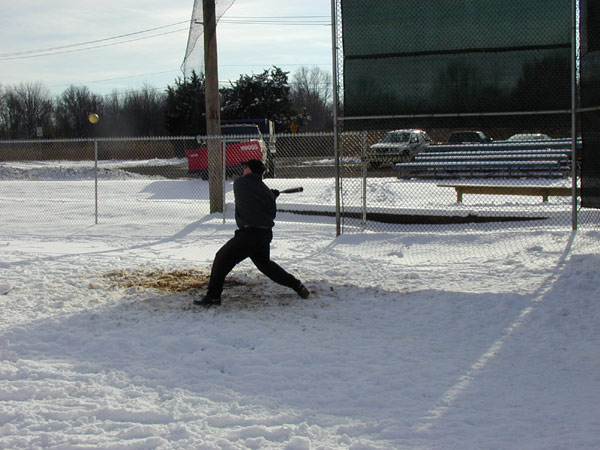 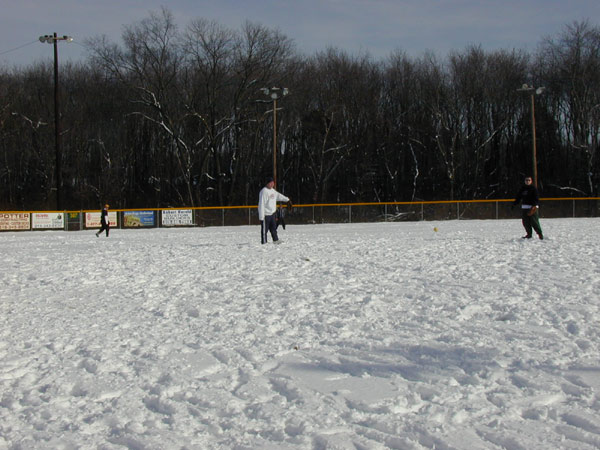 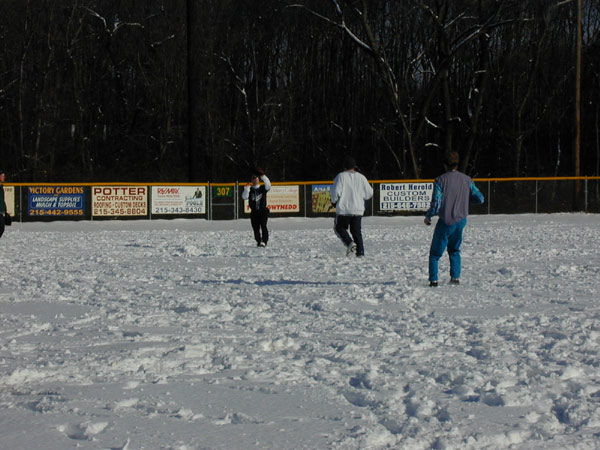 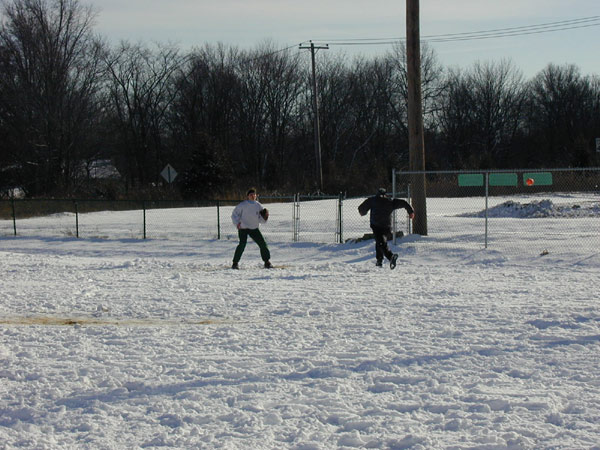 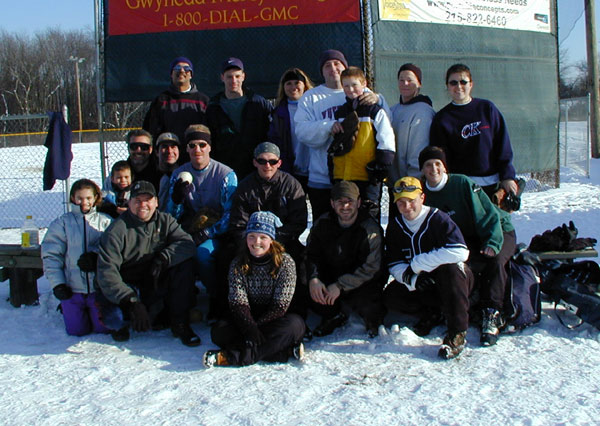 Of course, if local municipalities open ball fields sooner than 5/1 and the Governor allows recreational facilities to operate before then, we will begin play.
Top
Post Reply
7 posts • Page 1 of 1